Our Symbol: The Flaming Chalice 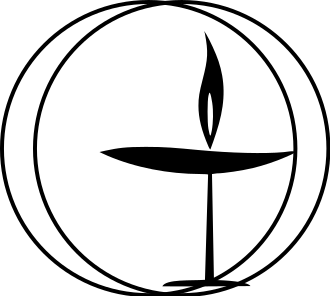 The flaming chalices are the primary symbols of the Unitarian Universalist Association, the UU Service Committee and of the Unitarian Universalist Fellowship of Dubuque. At the opening of the UU worship services on Sunday morning though out the land, chalices are lit with various opening words.  Also, at regional and national gatherings the services are usually started with a lighting of a chalice.

What is the significance of the flaming chalice? There was no “official” adoption of the chalice as the symbol for Unitarian Universalism and no official interpretation of its meaning. Maybe having just one interpretation might be like having a confining official creed. However, there were several historical antecedents as to its present use.

Chalices and cups have been used though out the history of religion. A chalice can signify community when all can drink from it. Jesus used a chalice at his last Passover.  Jan Hus, a liberal Czech priest and forerunner of the Reformation, proposed that the communion chalice be shared even with the laity which undoubtedly was considered as a radical democratic idea.

Fire and flames have been ancient pagan and religious symbols for witness, sacrifice, and courage.  For many UUs the flames have also signified the light of reason and enlightenment.

UU minister Dan Hotchkiss, tells the story of the beginning of the use of the chalice within the Unitarian denomination.  In the days preceding Word War II, the Boston-based Unitarian Service Committee was attempting to rescue Unitarians and other religious liberals and Jews from those parts of Europe (notably Czechoslovakia) where Nazism threatened their lives. (There is a documentary about that daring mission featuring Martha and Reverend Waitshill Sharp. It was produced by the Sharps’ grandson and Ken Burns.)

Reverend Charles Joy, the executive director of the Unitarian Service Committee, asked Austrian artist, Hans Deutsch, in 1941 to create a symbol that all could understand and be used as a code for those who needed to be rescued. Deutsch had escaped from France after making cartoons about the Nazis. For the design he borrowed the idea of a chalice from the Czechoslovaks. The design he created was made into a seal for papers and a badge for agents moving refugees to freedom.  In time the chalice became a symbol of Unitarian Universalism.  The UU Service Committee, today has their own chalice symbol, and is shown below along the Association’s and the Fellowship’s.

Although begun in 1984 the Unitarian Universalist Fellowship it was not until out 1987 the society decided to participate in the denomination’s theme with each society having their own chalice.  Over a two month period, the Board accepted designs from members and friends.  Charter member Frank Potter’s design was the one chosen. Like Deutsch, he borrowed some design concepts. He incorporated the base of commercial black iron chalice, “the leaping chalice” which we had been the using from our inception. For the flames, he had seen another design with several flames and took out two from that which resembled soaring “Us.”

So traditions celebrating values of reason and witness with service via chalice with flames are still with us in the denomination and in the Unitarian Universalist Fellowship of Dubuque. We are a religious organization with relative few rituals but the Sunday morning lighting of our chalice along with other UU congregations around the world holds special meaning for us.

By Frank Potter, UUFD charter member with some information by a UU brochure by Don Hotchkiss